Ever heard the phrase, “you’ve gotta be cruel to be kind?” It has never been truer than when referring to gum disease treatments. Periodontal disease affects as much as 80% of US adults, but the way dental practitioners handle periodontal treatments may be part of the problem. Patients avoid periodontal treatment due to lack of treatment urgency, not fully understanding necessary treatments, and money. Many dentists hesitate to fully explain and recommend periodontal therapy because they fear patients will simply cancel appointments due to the added cost. Instead, dentists tend to try the “nice” approach – recommending periodontal appointments every three months but billing them as regular dental cleanings during six month checkups. However, by changing the focus of periodontal disease treatment to communicating clearly, emphasizing assessment and prevention, and working with patients to maximize insurance benefits, dentists can better equip patients to receive the dental care they need.
END_OF_DOCUMENT_TOKEN_TO_BE_REPLACED 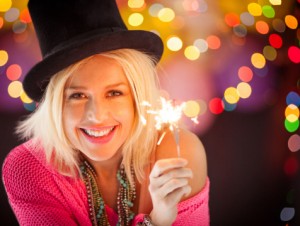 2014 is rapidly coming to a close, and New Year’s Day is just around the corner. People from all around the world are coming up with ideas for their New Year’s resolutions, hoping to make this the year they make great strides toward self-improvement and better health. As we all prepare to welcome 2015 in style, we’d like to take a few moments to suggest one resolution that is not only easy to keep but incredibly rewarding as well.

Dental Checkups for the Whole Family

Biannual checkups and cleanings are critical components of any oral hygiene regimen. They present you with the perfect opportunity to ask your dentist any questions you may have about your teeth and gums, as well as any other concerns you may have at the time. These simple visits also include a thorough exam and cleaning, two things your teeth desperately need to stay healthy for life.

Unfortunately, many people still believe that it’s fine to skip out on their routine checkups because they haven’t noticed any problems that warrant a dental visit. The problem with that line of thinking is that not every oral health concern presents with noticeable symptoms. The early stages of gum disease, for example, may be virtually undetectable. Small cavities – particularly those that form between the teeth – may be difficult to see or feel until they have progressed to a more advanced stage of decay. Even a root canal infection may slip under your radar without the practiced eyes of a dentist to spot the signs with a detailed x-ray.

The great news about dental checkups is that they are covered by most dental insurance plans; you may not have to pay a single penny to get your teeth cleaned by a dedicated professional!

While vowing to eat healthily, save money, and get in shape are all viable and popular resolutions, we suggest placing more emphasis on your oral health this year as well. Your mouth serves as a portal to the rest of your body, and the status of your teeth and gums can potentially affect your overall health. This New Year’s Eve, make the decision to treat your smile well with routine preventive visits at your local dental office. You’ll be glad you did. 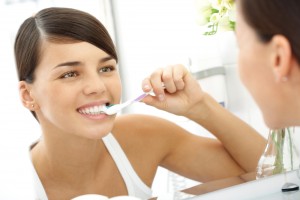 Most people know that good oral hygiene includes brushing your teeth at least twice a day. And for most, those two times are usually in the morning—as you’re rushing to work or getting the kids off to school—and at night, when you’re fighting to keep your eyes open before falling into bed. Regardless of whether your day is beginning, ending or somewhere in between, proper brushing is worth the time and effort for good oral health.

First off all, did you know that proper brushing requires at least two minutes? Most adults spend a fraction of that time brushing their teeth every morning and night. Try looking at the clock when you start brushing, then brush normally and check the time when you’re finished. Chances are you didn’t spend enough time to thoroughly clean your teeth. To really do a good job and ensure better oral hygiene, spend two minutes brushing.

What is the Best Technique for Brushing Teeth?

Start out cleaning the outer surface of your upper teeth and then your lower teeth. Continue by brushing the inner surface of upper and lower teeth. Then, brush the chewing surfaces of your teeth, concentrating on your molars. Finally, be sure to brush your tongue, too.

Always choose a soft brush with round-ended bristles. Stiff bristles can hurt your gums. A powered toothbrush can be a good choice, too, especially if you have difficulty brushing because of limited manual dexterity. The type of toothpaste you choose is an individual matter. There are a variety of toothpastes to address a variety of concerns from teeth whitening and cavity prevention to eliminating tartar and reducing teeth sensitivity. Talk with your local dentist about which toothpaste is best for you.

How much do you think you influence your little one? If you think the answer is “Not much,” guess again. According to a study published by the Journal of Dental Research, parents have an enormous amount of influence on their children, and that extends to areas of health and wellbeing. The study found that if a mother had a cavity, her child was twice as likely as other children to also have a cavity.

The takeaway? Teaching your son or daughter about brushing and flossing—not to mention practicing what you preach—can help your child develop healthy habits that will stick with them throughout their life.

Also important are regular dental visits every six months. Regular visits will give your doctor a chance to look for common oral health conditions and provide treatment if necessary. Conditions like gum disease and tooth decay need to be caught early so they can be treated quickly, before they have a chance to become more serious.

How long has it been since you or your child saw a dentist for a regular visit? If it’s been more than six months, call your local dental office today to reserve an appointment. During your and your child’s visit, your doctor can talk to you both about brushing and flossing and can offer helpful advice you both can use on a daily basis.

Remember, the behavior you model at home makes a real difference. Help your child develop diligent brushing habits by demonstrating them yourself.

Flossing is a crucial part of dental hygiene, and one that shouldn’t be taken lightly; after all, it’s a tried-and-true method for getting rid of stubborn food particles that settle in hard-to-reach places between teeth, as well as an effective way to disrupt cavity-causing bacteria and keep them getting too comfortable. Of course, you might be thinking: how hard is it to drag some string between your teeth? Harder than you might think. Countless people make casual errors every day when flossing, and while it might not seem like a big deal at the time, you could find yourself in need of fillings or other restorative dental work before you know it. Here are five common mistakes that are made during flossing that you should watch out for:

When You Use the Same Section of Floss the Entire Time

As we said above, flossing removes harmful bacteria from between your teeth. Why would you want to move that bacteria around your mouth into new areas instead of getting rid of it altogether? It might seem wasteful, but when you use the exact same area of floss on multiple teeth, you can replace plaque that’s already been removed into a brand-new home.

When You Skip the Teeth in the Very Back

While some of your teeth may have an open space next to them, it’s still important to work the floss behind them and do some cleaning. By doing this, you can make sure to remove bacteria that sometimes finds its way between your tooth and gums.

When You Snap the Floss between Your Teeth

Some of your teeth have very tight adjoining spaces. When you notice an area like this, try not to force the floss so that it jumps down against your gums. Instead, work the floss back and forth until it slides through. Snapping the floss not only hurts your gums, but it can also cause them to recede. Gum disease might not be far behind, too.

When You Quit Because Your Gums Start Bleeding

We understand that the sight and taste of blood can be scary sometimes, but don’t worry! You’re not hurting your gums. You’re just suffering from gingivitis, a condition that happens when your body sends more blood to the gums so that they can fight off growing plaque. You can alleviate this condition by removing that plaque with flossing. After a few days of dedicated flossing, your gums should return to normal!

When You Floss Aimlessly Without Keeping Track Of Your Teeth

You have a fair amount of teeth, and when you’re flossing, it can be easy to become distracted and accidentally skip one or two. Creating a plan that you follow whenever you floss will guarantee that you leave no area untouched. As long as you stick to it, you shouldn’t have any problems!

Just be sure to watch out for these common mistakes, and keep flossing! Your teeth will thank you. 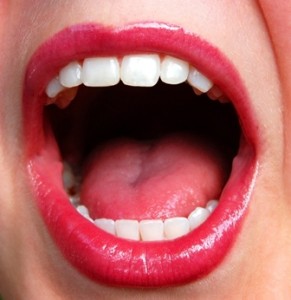 Have you noticed friends or co-workers stand further away than necessary to talk to you? Do you receive daily offers of gum and mints? Does your dog run away when you bend down and say hello? If the answer is yes to any of these questions … you probably have bad breath, also called halitosis.

How is it possible for you to have bad breath and not know it? Your body uses a process called acclimation to filter out its own scents so you can use your nose to detect outside smells. This means your nose is used to whatever odor is emitting from your mouth. Even if you cup your hand and breathe into it, you probably won’t detect foul aromas. So, how can you tell if you have halitosis?

The easiest test for determining if your breath is rank is to ask someone. Friends or family members will probably be more than happy to render an honest opinion. Another way to test for bad breath is to wipe your tongue with a cotton ball and give it a whiff. Or go to a mirror, stick out your tongue, and see if it looks whitish. Ew! That’s accumulated bacteria, which produces the sulfur compounds that create halitosis.

Why do I have bad breath?

The most common reason people have bad breath is decaying food particles and bacterial growth in the mouth, especially on the tongue. If you have poor oral hygiene habits, the accumulation of food and bacteria will make your breath smell like you ate gym socks for lunch.

END_OF_DOCUMENT_TOKEN_TO_BE_REPLACED

A Healthy Smile? It’s Easy to Find! Remember to Brush & Floss Every Day!

American Dental Association has set aside to encourage dentists, parents, and other adults to educate children on how to take care of their little smiles. And even though that’s more than a week away, it never hurts to get a head start! Now’s the time to help kids brush up on good oral health!

Here are some ways your children can maintain strong, healthy smiles that last a lifetime: END_OF_DOCUMENT_TOKEN_TO_BE_REPLACED